Nov. 2, Bismarck, ND—New research released by North Dakotans for Public Integrity, the committee supporting Measure 1, reveals that the North Dakota Petroleum Council, which is dominated by major national and multinational corporations, has received over $2 million in state tax funds, nearly 85 percent of it in the last six years, to use for its own marketing purposes. The target audience for its “Energy of North Dakota” and “Oil Can!” programs is the taxpayers themselves.

“What we have here is taxpayers footing the bill to be wooed by the oil & gas industry—a perfect example of the kind of favorable treatment that special interests are able to gain for themselves through their lobbying and unaccountable political spending,” said Ellen Chaffee, Vice President, North Dakotans for Public Integrity. "By comparison, agriculture industries pay for their own promotion and research through check-off dollars.”

Two percent of the state's share of the oil & gas gross production tax and oil extraction tax revenues, up to $10 million, is available to the Oil and Gas Research Fund, administered by the North Dakota Industrial Commission, every two years. The North Dakota Petroleum Council receives grants through the fund’s “education” program.

“With an eye toward creating a favorable climate, the North Dakota Petroleum Council also lobbies the state legislature for extraction tax reductions and other favors. One such reduction has cost approximately $570 million in tax revenues so far. This is just one small example of why lobbying groups are spending over $430,000 to oppose Measure 1,” adds Chaffee.

The North Dakota Petroleum Council has reported spending $60,000 to oppose Measure 1. The source of those funds is unknown. Measure 1 would give voters the right to know the original sources of political spending in North Dakota.

“When you see the favorable treatment that interests such as the North Dakota Petroleum Council are receiving from our government, it shouldn’t be surprising that they’re doing everything they can to defeat Measure 1,” said Dina Butcher, President of North Dakotans for Public Integrity. “They know what's at stake. They routinely spend money to influence North Dakota elections and government—clearly, they don’t want North Dakota voters to know where their money is really coming from, or what it’s buying.”

In addition to giving voters the right to know the sources of political spending in North Dakota, Measure 1 would ban foreign political spending, prohibit lobbyists from simultaneously serving as elected officials, ban gifts from lobbyists to politicians, close the revolving door between public service and lobbying, and establish a state ethics commission to provide oversight and ensure accountability.

“The Anti-Corruption Amendment is supported by North Dakotans who believe it is essential to protect the integrity of government from the influence of unaccountable special interests,” said Chaffee.

More information and the full text of the North Dakota Anti-Corruption Amendment can be found at www.ndintegrity.org. 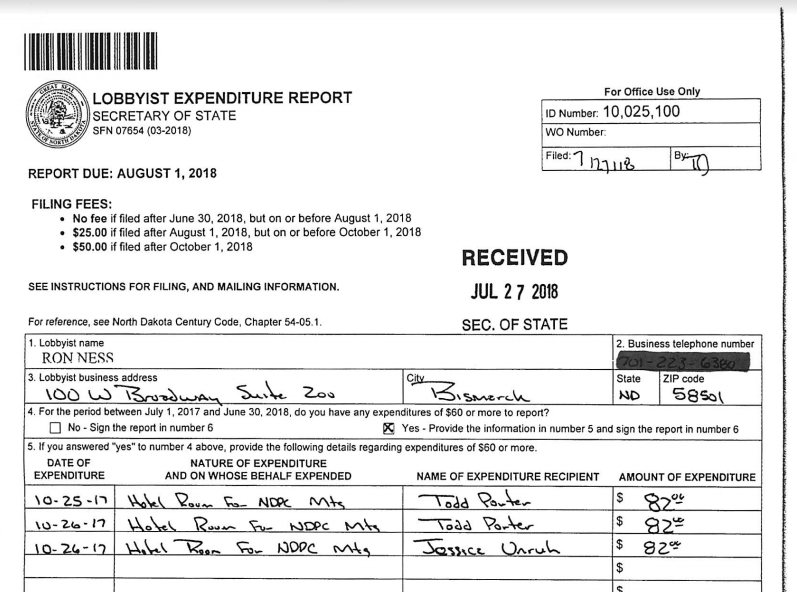