Nov. 1, Bismarck, ND—This afternoon at a press conference at their office in Bismarck, North Dakotans for Public Integrity announced the discovery of a so-called “dark money” group attempting to influence North Dakotans’ voting decisions through paid advertisements on Facebook about Measure 1, the North Dakota Anti-Corruption Amendment, for which the money spent has not been reported.

The group, Royalty Owners and Producers Educational Coalition, Inc., or ROPE, is a trade association incorporated as a nonprofit 501(c)(6) in Tulsa, Oklahoma.

According to the Facebook Political and Issue Ad Archive in North Dakota, ROPE has already spent thousands of dollars on the advertising campaign, yielding as many as 260,000 impressions across Facebook.

According to current North Dakota state law, any spending over $100 to influence a ballot measure must be reported.  As of October 31, 2018, ROPE was not registered at the North Dakota Secretary of State as a committee or an independent expenditure filer.

“ROPE is a 'dark money' organization that anonymously spends money on our elections here in North Dakota,” said Kathy Tweeten, Treasurer of North Dakotans for Public Integrity.  “Even if they reported, we wouldn’t know where the true source of the money being spent really came from.”

“It’s ironic, really,” said North Dakotans for Public Integrity President, Dina Butcher.  “The lobbyists and corporations against Measure 1 say 'dark money' isn’t a problem in North Dakota.  They say that it can’t or won’t happen here because of our existing laws and oversight. And yet here’s proof.  Right here, blatant 'dark money' from out of state, on Facebook, against Measure 1. These ads are most likely the tip of the iceberg in spending on North Dakota campaigns—spending that is intentionally meant to be kept hidden,” said Butcher. 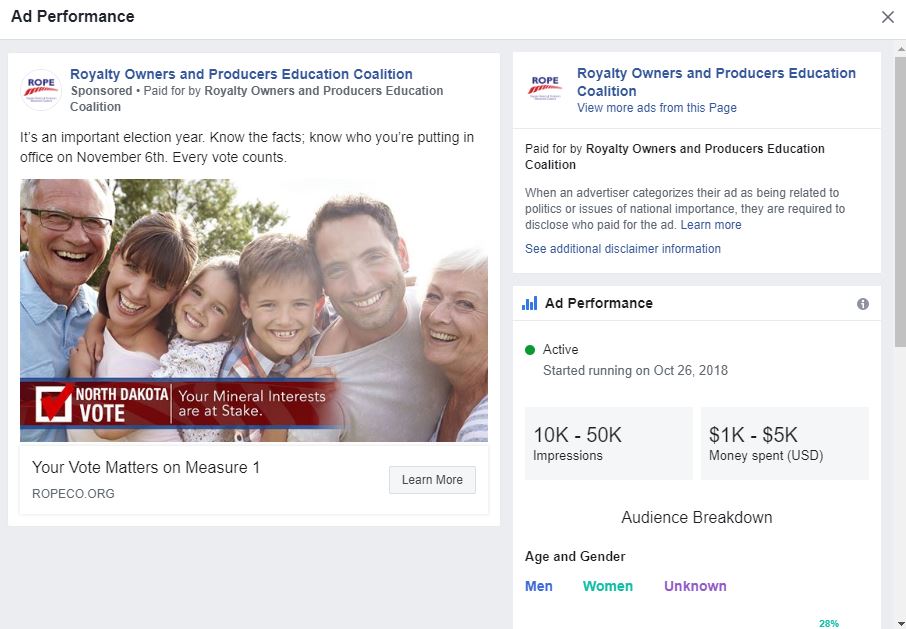 “Outside groups, backed by out-of-state special interests, are injecting a flood of unaccountable, 'dark' money into our state elections in an attempt to influence your vote on Measure 1. Measure 1 will shed light on all ‘dark money’ in our elections by requiring full, prompt, and online disclosure of the true sources behind election spending over $200,” said Butcher.

ROPE's website includes "Know the Facts" pages for elections in Arizona, California, Colorado, Kansas, North Dakota, Oklahoma, and Texas.  “The pages clearly oppose ballot measures and candidates not favored by the oil and gas industry. The North Dakota page even links to the official website for 'North Dakotans for Sound Government,' the front group for the special interests opposing Measure 1,” said Ellen Chaffee, Vice-President of North Dakotans for Public Integrity.

“It is highly likely these ads are funded by the oil and gas interests  But, because ROPE is a 'dark money' group, the only way we’ll ever know who is really behind this kind of spending is if North Dakotans choose to pass Measure 1 on Tuesday,” said Chaffee. 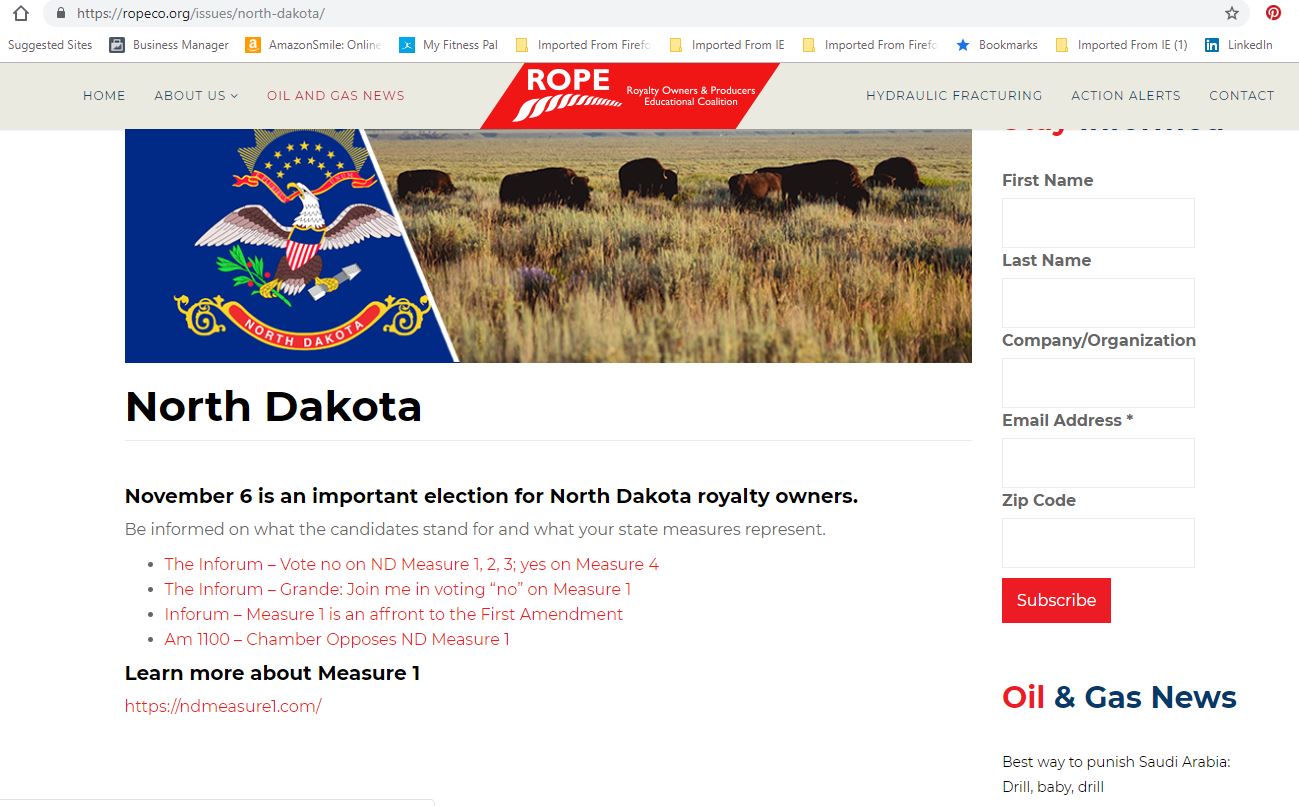 “The ‘dark money’ loophole is one way that foreign money gets into U.S. elections, despite long-standing federal laws banning spending by foreign nationals and foreign corporations in U.S. elections,” said Chaffee.

“Is this part of a bigger web? We already know that the corporations and lobbyists openly opposing Measure 1, as part of North Dakotans for Sound Government, have ties to out-of-state and even foreign energy interests and are spending dark money against Measure 1.  Is this just another connection?  How deep down the rabbit hole do North Dakotans have to go to find out who is spending money to influence our state government?  We have a right to know who is trying to buy our votes. It’s time to bring this dark money into the daylight with Measure 1,” said Chaffee.